Helene Irene Foley was the eighth of ten children born to Robert and Anna (Kramer) Foley on a farm south of Emery, SD on October 20, 1927. Growing up, she lived and attended school in Bridgewater, Spencer and Salem. She graduated from St. Mary’s High School in Salem in 1946. She worked at the Nickel Plate Café in downtown Sioux Falls between her junior and senior years of high school. After graduation, she worked for a couple of years at Northwestern Bell Telephone Company before returning to Salem to marry Eugne M. Heiberger on December 28, 1949 at St. Mary’s Catholic Church. They were married for 63 years. For many years she did the bookwork for their business at Heiberger Standard Station. They moved to Pierre for three years and while there she worked at Pierre National Bank. They returned to Salem and in 1976, she opened her own ladies clothing store in Salem- Helene’s. She enjoyed 20 years of doing business on Main Street.

After retiring, she enjoyed playing cards with friends, sewing, traveling, baking and having lunch at Joy’s Bakery. She has made countless quilts, afghans, holiday table runners, throws, baby blankets, and aprons for her children, grandchildren and great grandchildren. In recent years she loved attending her great grandchildren’s activities. Her favorite sports team was the Minnesota Twins. Helene was a member of St. Mary’s Altar Society, St. Mary’s funeral committee, Catholic Order of Foresters, St. Mary’s Quilters and the PSA.

She was preceded in death by her parents, her husband, Gene, two brothers, Robert and Richard “Dick”, her five sisters, Kathleen, Patricia, Margaret, Phyllis and Anita, her son-in-law, Bob Rayman and many sisters- and brothers-in-law.  www.kinzleyfh.com 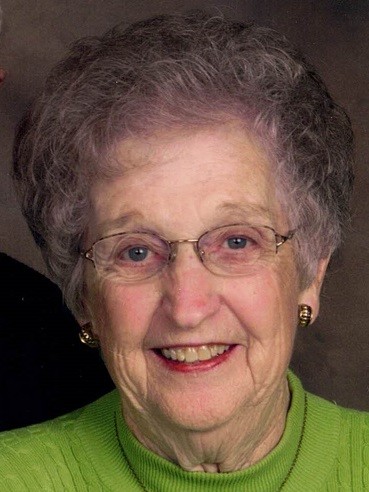